Apps have made many billionaires in the 21st century. Mark Zuckerberg, Jeff Bezos, Reid Hoffman are just a few of the popular ones. The combination of smartphones and apps has made us addicted to the latter.

Whenever somebody is on their phone, they are using an app, not necessarily a social media app one but an app for sure.

Building an app that pumps out money is the dream of startup founders today. To get a million downloads, secure funding, and get the unicorn tag.

A common thread among many of such apps is the huge investment from VCs without actually making any profit. It remains a mystery for many aspiring entrepreneurs as to why startups with no profit have such massive investments.

In this blog, we will reveal the secret of millions of dollars of funding for apps and how you can do the same. But first, let’s see what happened when Mr. Kunal Shah, the founder of fintech startup CRED, tweeted about it becoming a unicorn, people started flipping out on it.

“You are not making a profit.”

“You are burning cash.”

It is true that without any profit and cash burn, Cred secured a $215 million funding in the Series D round and is valued at $2.2 billion.

This is not the first time it’s happening that an app without actual profit has secured such huge funding. It has happened before, and we will explain how and why startups with no profit at all suddenly became one of the largest companies and keep getting larger. And why top VCs are funding them.

In 2004, a young kid in a dorm room of Harvard had an idea to create a platform for college kids to find each other, interact, go on dates, and whatnot. Initially, it was built for college students only. The founder’s team reached out to students from different colleges and got them on the platform.

As the popularity grew, more students knew about the platform, and more of them joined it. Started with just Harvard, the platform now has college students from many schools across the states. The team raised money and got the venture capitalist Peter Thiel to invest $500,000 in the seed round.

Also Read: How To Reduce the Cost of Mobile App Development for Business?

The company started growing, and the small idea to create a platform for college students to become the monstrous social media platform with over a billion users we know today – FACEBOOK and the kid was no other than Mark Zuckerberg.

But why are we talking about Facebook? We know it makes a lot of profit.

This story is relevant here, because as the famous Harry Potter dialogue goes – history does repeat itself.

When Facebook was growing, it too didn’t make any profit, and the blabbermouths talk the same nonsense about the social media giant.

Look at it today. Facebook is an $893 billion company! The social media platform makes ridiculous amounts of cash from advertising and other methods.

Snapchat has the same story. The third app is YouTube. Before Google acquired YouTube, it, too, didn’t make a profit. It has a YouTube premium now, but it was just a free video uploading app back then. Today the google and alphabet group is worth 1.5 trillion dollars. Yup, you read that right. 1.5 TRILLION.

So, what’s the play here? What is it that people outside the app economy and venture capital ecosystem fail to grasp?

Its Distribution and attention.

In simplest terms, Distribution means people/users. The more users sign up on your app, use your app every day, the better Distribution is. If you have Distribution, you will make money. But not every app with Distribution makes money. There is a second ingredient – ATTENTION.

Even if the entire world signs up on your app, but no one uses it, there is no way an app like that ever gets companies to advertise on it. That is why attention is crucial. So, you need to mix Distribution with attention.

Why do you think the creator’s economy is at its all-time high?

An influencer with 100,000 followers sells a cup or a T-shirt, or a monthly planner and gets paid. On the other hand, one with 500 subscribers won’t make any. The difference is attention.

We live in an attention-starved world. The one who owns the eyeballs will make a fortune. And attention is why Facebook, Instagram, LinkedIn, and other apps make revenue through advertising because they have users’ attention. It is also their business model; all a company needs is to make the product, and Facebook gives the surety to market it.

When you are building an app, and it just started to grow, how do you know whether you will profit from it one day? And how does the venture capitalist know whether to invest in your app or not? Does your startup have the potential Distribution that you might run ads and make bank?

How does any app company know whether they are doing good? Spoiler alert – it’s no sign-ups.

And here is the third factor which makes or breaks the funding deals for apps. It’s the retention rate.

Retention rate is basically how long a user sticks on your app or platform.

It is observed that the apps which are successful in making users come back, again and again, are the ones that fulfill a basic need. For example, let’s take Facebook; why do you think people check their Facebook feed many times a day? Because it is filled with updates about the people you want to know about. What are your friends up to? Are they traveling somewhere new? Did they get a promotion or got engaged?

Also Read: How To Test If An App Has An Audience Before Building It?

Humans want to connect, and that’s what Facebook does for its users. One can find their friends from first grade, talk, and catch up about all the things that have happened in their lives.

Before Facebook and other platforms, it was impossible to connect and find your friends and have the social relationships we do now. Now with FB, it’s instant. That is the value of social media platforms in our lives.

Measuring the retention rates – whether a user who signed up comes back tomorrow, one week later, two weeks later, or a year later. Are the users sticking to the app? And this retention metric is how investors know which company tomorrow might sell ads or use that Distribution to sell anything they want.

Coming back to Cred. Cred is not a social media platform. So how does a credit card payment app make money? What is the best? At a valuation of $2.2 billion, their retention rate must be insanely good, and that is why investors are so interested in it. An app where users come back to pay their credit card bills has the potential to sell anything they want every month.

Retention rate is how app owners and startup founders measure the level of trust among their users. The higher the retention rate and the longer a user sticks on your app, they will trust you when they make a buying decision.

After our discussion, it must be clear that we live in an era of Distribution and trust. If your app has a user base and has the retention of that user base, you can make a lot of money. Remember, the four pillars to get investors and secure millions in funding are Distribution, attention, retention, and trust. Once your app generates all four, it will be unbeatable.

At Imenso, our mobile app development company, we love to build and market apps to people. If you also have an idea, don’t sit on it; talk to our team and let us help you build an app that users trust. 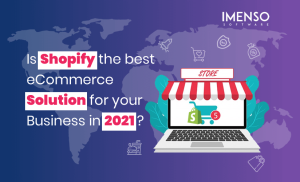 Is Shopify the best eCommerce Solution for your Business in 2021?